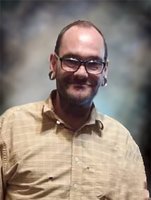 Michael Erick Haynie was born on April 1, 1976 in Vermillion, SD to Richard Michael and Denene Belle (Vosberg) Haynie.  Michael attended Elkpoint/Jefferson High School and graduated in 1995.    He married Emma Elder on June 28, 2008  in Burbank, SD.  To this union two children were born, Ethan and Rose-Mary.

Michael loved to write poems, playing guitar, drinking tea, coloring, listening to music and visiting with his children.  Michael loved his family and was loved by all his friends and family.  His daughter’s friend stated “He might be dead but his soul is still alive and in a better place”.

Michael was preceded in death by his parents; twin brother, Richard Derick “Dick” Haynie; grandmother and both grandfathers.