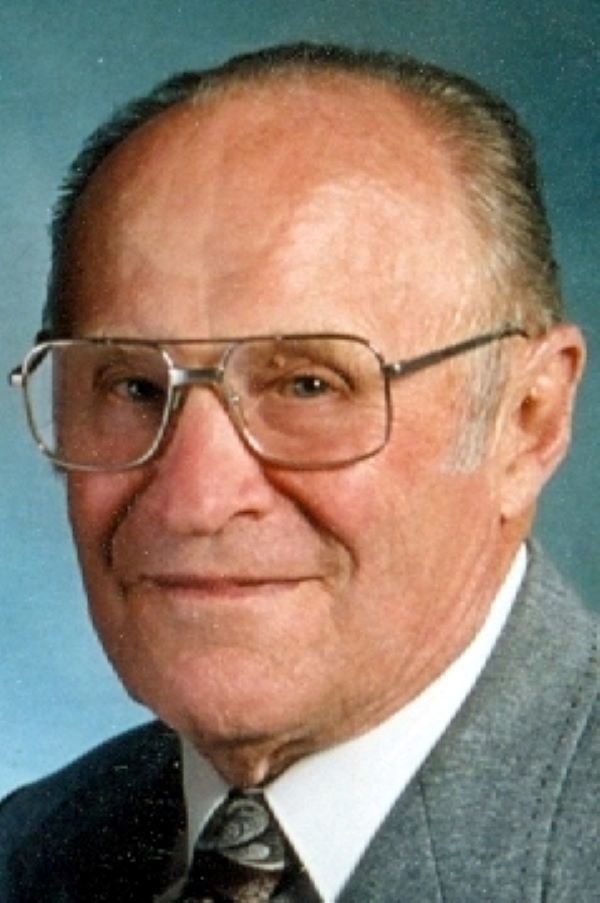 Reno Robert Mettler was born on November 16, 1927 on the family farm near Menno, SD to Edward and Elisabeth (Stoebner) Mettler. He was baptized in infancy on February 5, 1928 at Zion Reformed Church by Rev. William Huenemann. He was later confirmed on June 7, 1942 by Rev. William E. Korn at Zion Reformed Church. Reno attended rural school through the eighth grade. Reno was married to Bernice Knodel on September 4, 1949 at Immanuel Lutheran Church in Menno by Rev. Hans Weidenman. Their union lasted 58 years. To this union, a son, Michael was born on June 23, 1956. He died on November 23, 1956. Reno served in the United States Army from January 1952 to December of 1953 in 29th Transportation Car Co. He served during the Korean War in Germany. Upon his return home from the service, he became an active member of the American Legion Rames-Bender Post 152. Together with Bernice, Reno farmed south of Menno until 1993 when they moved into Menno. Reno served various offices at Immanuel Lutheran Church where he was a faithful member. He was an active volunteer with the Menno Power Show since its inception. He enjoyed farming, gardening, and restoring furniture over the years. Reno and Bernice enjoyed dancing whenever they were given the chance. He worked for Smidt Furniture and Appliance once he had retired from farming. He loved spending time with his nephews and nieces and their families. Reno enjoyed teaching them about fishing, family history, home improvement projects, and going on family trips and reunions. They will all remember him as someone who loved each one of them unconditionally and for the smile on his face. Reno is survived by nephews and nieces: Steven (Shirley) Knodel, Freeman, SD; Keith (Betsy) Knodel, Freeman, SD; Karen (Jon) Nealis, Lexington, KY; Kelly (Laura) Knodel, Freeman; Patricia (Jim) McMahon, Twin Falls, ID; Marilyn (Lanny) Long, Yankton, SD; James (Eileen) Knodel, West Point, NE; Barbara (Terry) Buechler, Johnston, CO; Rick Mettler, Lincoln, NE; Darus (Laura) Mettler, Norfolk, NE; and Philip (Elisa) Heckenlaible, Sioux Falls; many great-nieces and nephews; sisters-in-law, Viella Knodel, Freeman, SD and Verna Knodel, Lexington, KY; as well as a host of family and friends. Reno was preceded in death by his beloved wife Bernice in 2008, his son Michael, his parents, brother Leroy Mettler, sister Priscilla Heckenlaible, brothers-in-law Raymond and Clifford Knodel and Ray Heckenlaible, and a sister-in-law Kathleen Mettler. In lieu of flowers, direct your memorials to Immanuel Lutheran Church, Salem Mennonite Home, or a charity of your choice.
To send flowers to the family or plant a tree in memory of Reno Mettler, please visit Tribute Store
Wednesday
26
February