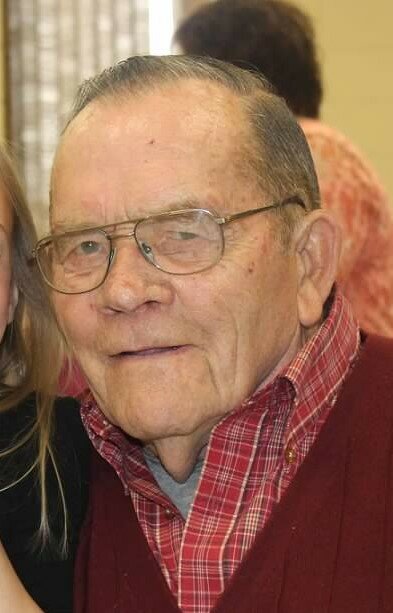 Fred E. Branaugh, age 97 of Yankton, SD passed away on Friday, September 10, 2021 at Avera Sister James Care Center in Yankton.  Funeral services will be 10:30 a.m. on Wednesday, September 15, 2021 at Trinity Lutheran Church with Rev. Jeff Otterman and Rev. Kwen Sanderson officiating.  Burial will follow in the Yankton Cemetery with Military Honors at the gravesite by Ernest Bowyer VFW Post 791 and SDARNG Honor Guard.  Visitation will be 5 to 7:00 p.m. on Tuesday, September 14 with a 7 p.m. prayer service at Opsahl-Kostel Funeral Home and Crematory.  There will also be visitation for one hour prior to service time at the church on Wednesday.  Live streaming of Fred’s service can be found at:  https://www.facebook.com/opsahlkostel/live.  Online condolences may be made at:  www.opsahl-kostelfuneralhome.com.  Arrangements are under the direction of Opsahl-Kostel Funeral Home and Crematory in Yankton.

Fred Everett Branaugh was born in Charles Mix County on April 1, 1924 to Ed and Faye Branaugh.  He grew up on a farm in Charles Mix County and attended rural schools through the 8th grade, graduating on June 12, 1940.  During his early years Fred enjoyed spending time with family and going to dance halls.  It was there that he met Isabel Meng of St. Helena, NE in 1944.    He married Isabel on July 20, 1945.  Together they had four children, Mike Branaugh, Rick Branaugh, Linda Koch, and Susan Repp.

Fred enlisted in the Army in February, 1945.  He was sent to Lemay, Missouri for basic training at Jefferson Barracks and then Camp Fannin.  Fred was assigned as a replacement to the 6th Division (“Red Stars” Division), U.S. 6th Army.  After basic training, Fred was shipped out to Hawaii and ultimately, Manila.   They finally docked and headed to Clark Field in August 1945.  The 6th Division remained in the Cagayan Valley and the Cordilleras Mountains until VJ Day.  From there his Division was ordered to occupy Korea.  In Korea,  their job was to destroy all warlike material and to help establish a police force, Korean Army (ROK) and South Korean Government.  Fred was honorably discharged in November 1946                                 and returned home on Christmas Eve 1946.

When Fred returned from service he and Isabel lived in Yankton.  Fred worked as a maintenance man for the Yankton Public School District.  In 1953, Fred and Isabel moved their family to St. Helena to help her father farm after her mother passed away.  They returned to Yankton the following year.  Fred took a job at local lumberyard, Contractors & Builders for the next 11 years.  Always the hard worker, he and Isabel earned extra income by managing the drive-in movie theater north of Yankton.  They also owned and operated Superior Speed Wash Laundromat in Yankton for over 20 years.  Fred also did carpentry work for Frank Branaugh.  After leaving the lumberyard, Fred worked full time in the maintenance department at the S.D. Human Services Center for 20 years until his “retirement” in 1987.  Fred could not sit idle, so he continued to work as a self-employed carpenter until the age of 80.  He became an expert at fixing and installing garage doors to several Yankton residences.

During their marriage Fred and Isabel enjoyed camping, square dancing, and spending time with family.  They loved remodeling their homes together.  Following her death in 2004, Fred continued to keep busy.  He could be found on a daily basis at HyVee having coffee.  If you said hello to Fred, you needed to be ready to stop and visit for up to 20 minutes.  He loved to tell stories and talk to people.   He enjoyed trips to Wisconsin to see his daughter Linda and her family.  He also spent time visiting his son Rick and his family on a weekly basis.  Fred stayed active in Yankton, attending Trinity Lutheran Church.  Locally, Fred spent time with his daughter Susie and her family, attending many events for his Great Granddaughter Madison.

Fred was an avid supporter of the Yankton School District and anything that related to kids.  He believed supporting kids was his way of helping create the future.  Fred was also a member of the Yankton VFW and the Center for many years. He loved to attend Riverboat Days; especially listening to Brule, eating beef sandwiches made by SD Cattlemen’s Association, and watching his granddaughter Stacy (Repp) Ryken and Great Granddaughter Madison Ryken dance.  Fred & his family watched the parade from his home at 901 Douglas every year.  Fred was extremely proud of his independence to the age of 97, living alone, doing his laundry, cooking, cleaning, and weekly grocery shopping.

Fred’s family is grateful for the care he received from Dr. Frank, the Hospice Program Staff at Avera Majestic Bluffs Country Neighborhood these last four months, and Pastors Kwen Sanderson and Jeff Otterman.

Fred was preceded in death by his wife of nearly 60 years Isabel, their son Mike Branaugh, his parents, and his siblings Gladys Hrdlicka, James Branaugh, Mae Cressy, Charles Branaugh, Robert Branaugh, and an infant sister Frances.

To send flowers to the family or plant a tree in memory of Fred Branaugh, please visit Tribute Store
Tuesday
14
September