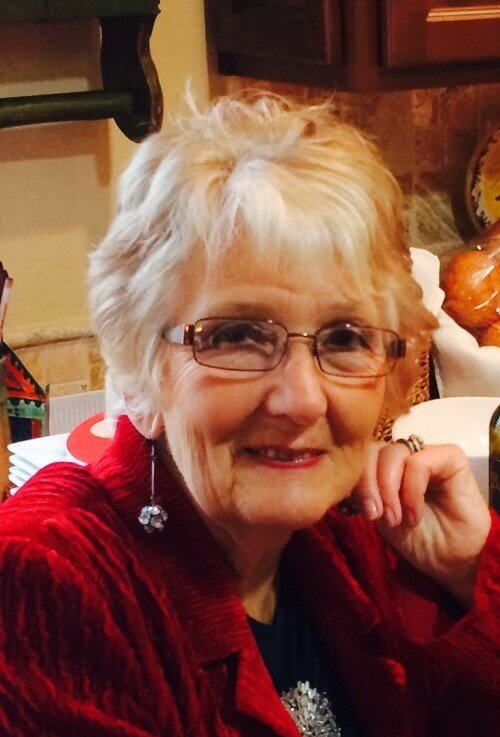 Please share a memory of Karen to include in a keepsake book for family and friends.
View Tribute Book

Karen Schempp Harmelink, age 84, became an angel in Heaven October 8, 2022.  Memorial services will be 10:00 AM, Tuesday, December 27, 2022 at the Opsahl-Kostel Funeral Home and Onsite Crematory, Yankton, SD with Rev. Michael Newago officiating.  Burial of her cremated will take place at a later date.  Visitations will begin at 9:00 AM Tuesday morning and continue until service time.  Online condolences may be sent at: www.opsahl-kostelfuneralhome.com.

Having been a lifelong resident of Yankton, she was born in the community to William Schempp and Helen (Strasser) Schempp on December 14, 1937, where she later attended public schools including graduating from Yankton High School in 1956.  She earned a Bachelor of Fine Arts degree from the University of South Dakota in 1960 and was a member of Alpha Phi Sorority, serving as President and participating in many sorority activities including runner-up to Miss University, writing fashion articles for the college newspaper, modeling for various issues of the school's magazine.  Upon graduation, her first employment was an artist for Hallmark Greeting Cards in Kansas City, MO.  She also taught Art at Nallwood Junior High School in Kansas City KN.  Having been fortunate to travel in Europe immediately after college graduation, she was determined to return and accomplished this by accepting a senior high school art teaching position on an United States Army base in Karlshue, Germany and taught for 3 years. She enjoyed opportunities to travel to most of the European countries, broadening her knowledge and appreciation of each while developing a lifetime interest in historic buildings and restoration.  Upon returning briefly to Yankton to visit her parents one Christmas, she met John.  A spark of romance developed as well as a long-distance courtship followed by an eventual return from Germany to Yankton and a marriage on August 14, 1965.  At the time, John was President and owner of Yankton Concrete Products and then eventually senior partner of Harmelink, Fox, and Ravnsborg Law Offices.

Karen was a member of the P.E.O. Sisterhood chapter CO and served as President (1990-1991).  She was a member of Antique Study Organization, Questers, and not only served as Arikara Chapter President, but as the first State Questers President from 1983-1986.  She was an active member of a local historic preservation group, Historic Yankton, Inc.  With interests in preservation and history, she served on the Board of Directors of the Cramer - Kenyon Heritage Home as well as on the Board of Yankton County Historical Society and Dakota Territorial Museum.  She was appointed to serve on the Mayor's Commission for Reconciliation for better understanding of racial issues.  Her interest in art led her to serve on the Board of Directors of the Yankton area Arts and in 2006 was the recipient of the Yankton Arts Advocate Award, and also membership in Connecting Artists.  Karen was the recipient of the Governor's Award for History in 1997 as well as being one of the first recipients of the Arts Hall of Fame Award from Yankton High School.  She has been an active member of the Christ Episcopal Church.  Her greatest organizational accomplishment was as General Chairperson of the International Questers Convention held in Rapid City, SD in 2001, involving 4 years of preparation and planning.

Karen continued to influence her grandchildren, teaching them how to make homemade pasta, the perfectly balanced cup of tea, and various art mediums.  She continued to develop her art skills throughout the years.  Jason, Scott, and Krista and some grandchildren have Karen's original beautiful works of art hanging in their homes.  Karen created much of her artwork before her children were born and then after her children were raised and living on their own.

Upon their retirement, John and Karen had resided in Cave Creek, Arizona during the winter months, enjoying the beautiful desert landscape, glorious weather, friends and family.  John passed away on August 17, 2019.  She is survived by her 3 children, 8 grandchildren, and 4 great grandchildren.

Memorials may be sent to the Yankton County Historical Society directed toward the Mead Museum at 82 Mikkelson Lane, Yankton, SD  57078.

To send flowers to the family or plant a tree in memory of Karen Harmelink, please visit Tribute Store
Tuesday
27
December

Look inside to read what others have shared
Family and friends are coming together online to create a special keepsake. Every memory left on the online obituary will be automatically included in this book.
View Tribute Book
Share A Memory
Send Flowers
Plant a Tree